Disquiet #0057 had us working with voice samples from three languages. Pick four words from each, and do something with the twelve.

The full set is posted here.

In other news: Laurie Anderson interviews Brian Eno in this article. And some Boston organization I’ve never heard of before is asking for funding to have another concert season.

I also found this beast in my attic closet: 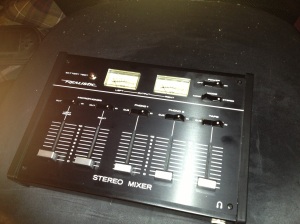 Someone moved and gave us some old stuff several years ago, I had just put it somewhere out of the way and forgotten about it. Price tag of $69.95 still on the box, probably from the late 1980s. It’s basically a standard two-turntables-and-a-microphone mixer, without the crossfader. Or EQ.

http://the-mjl.com View all posts by mjl